Hit enter to search or ESC to close
Chronology of Destruction

I WAS HERE SEPT 21, ’18, AND REMOVED ALL THIS, DESTINED FOR TP on the HOLOCAUST. 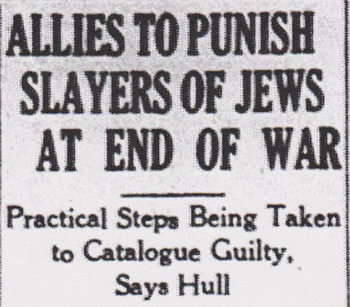 December 17, 1942 – The United Nations announces a War Crimes Declaration that focuses on the Jewish catastrophe in Europe and promises retribution against the Nazi murderers.

January 1943 – With their parents the sisters Anne Levy and Lila Millen are smuggled out of the Warsaw Ghetto and given shelter by a Polish family.

March 1943 – Siggy Boraks is transported from the Czestochowa ghetto to Blizyn labor camp.