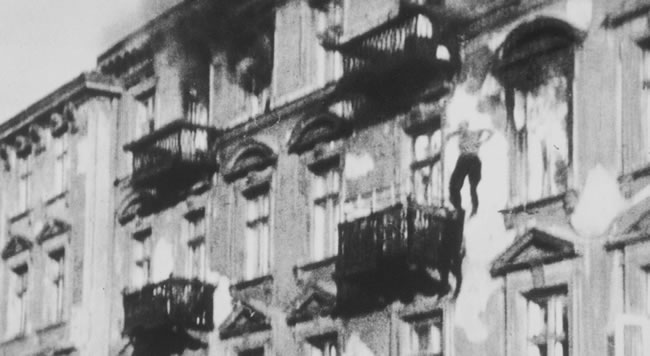 “It is nearly impossible to dismiss the reports as ‘atrocity stories.’ What the full story is when the full story is known, the actual facts may turn out to be worse than the fragmentary reports have indicated.”

– Dr. Samuel McCavert, General Council of Churches of Christ in America, quoted in The Times-Picayune on April 26, 1943

The Bermuda Conference opened on April 19, 1943, the very same day as the outbreak of the ghetto revolt in Warsaw. At the time, our survivor Lila Millen, 4 and a half years old, was living “illegally” with her parents and sister on the Aryan side of Warsaw, “passing” as a Catholic child.

The Bermuda Conference got underway on Monday, April 19, 1943. It was held at a resort overlooking the ocean. As with the Evian Conference in 1938, the stunning beauty of the setting was at odds with the subject at hand. The American delegates were (l to r in icon photograph) George Hall of the State Department, Harold Dodds, president of Princeton University, Richard Law of the British Foreign Office, U. S. congressman Sol Bloom, and Osbert Peake of the Foreign Office.

Why was the Bermuda Conference held in the first place? The stated purpose was to explore the possibilities of Jewish rescue. The unstated purpose was to deflect public pressure to do something. That pressure was growing. Jews in Romania and Hungary were still alive but in line for deportation to Auschwitz. Jews were stranded in neutral countries, including 5,000 in Franco’s ostensibly neutral Spain. Palestine, controlled by the British, was off limits. The British and American governments wanted no part of Jewish rescue. They made that clear. Their fear was that rescue would succeed. Richard Law, chairman of the British delegation and a member of Parliament, warned,

“… if Hitler accepted a proposal to release perhaps millions of unwanted persons, we might find ourselves in a very difficult position. For one thing, Hitler might send a large number of picked agents which we would be forced to take into our own countries. On the other hand, he might say, ‘Alright, take a million or two million.’ Then because of the shipping problem, we should be made to look exceedingly foolish.”

The other British delegate at Bermuda was of a similar mind. Osbert Peake, Parliamentary Under-Secretary for the Home Office (handling immigration issues), remarked (on a prior occasion):

“Many of the potential refugees are empty mouths for which Hitler has no use… It would be relieving Hitler of an obligation to take care of these useless people. If Hitler would agree to release a large number of old people and children, we should be placed in a ridiculous position because we could only take between 500 and 1,000 a month…”

The Bermuda conference ended after eight days. No “final report” was issued. Apparently without embarrassment, to say nothing of shame, Richard Law acknowledged many years later: “We said the results of the conference were confidential, but in fact there were no results that I can recall.”

The Times Picayune published four articles on the Bermuda Conference:

The Times-Picayune, April 18, 1943 – PASSOVER RITES TO BE OBSERVED, Jews to Mark Delivery from Egyptian Slavery, p. 20

The first article in the Picayune appeared on page 22 in the April 28th issue. This was the day before the conference. The headline was the exact opposite of the truth: “TO SEEK REFUGE FOR PERSECUTED.” Harold Dodds, president of Princeton University and chairman of the American delegation, announced (in the words of the AP reporter) that the American delegation “would seek temporary places of refuge for millions from Nazi-persecuted in the midst of war.” He then repeated the official U. S. position, “The solution to the refugee predicament is to win the war.” The Americans wouldn’t be pushed around. They intended to search for refuges “for persecuted Europeans on a strictly practical basis, regardless of pressure from various interested groups.”

On April 19th, the first day of the ghetto revolt in Warsaw and the first day of the refugee conference at Bermuda, the Picayune published a front page article about the Bermuda conference, quoting Richard Law, chairman of the British delegation, who hinted that the conference wouldn’t yield any practical results: “We have come to examine the refugee problem and reach some conclusion which could be referred to the respective governments as the basis for future inter-governmental action.” “Shipping handicaps” were cited (in fact, neutral shipping was plentiful). The delegates argued that diverting ships to rescue operations would interfere with the war effort. As for transporting 5,000 Jews from Franco’s Spain to a refugee camp in French North Africa, the Americans were against it. They feared inflaming the Arab population. Better to have the refugees stay put, the idea being this would make it easier for them to return home after the war.

The mendacity of the American delegation knew no boundaries. Repeating information that the American delegation provided him, the reporter wrote: “The United States already is sheltering more than 500,000 refugees from Axis dominated countries. Visas totaling 547,775 have been granted since Adolf Hitler came to power in Germany in 1933. Most of them were used to reach the United States.” This figure of 547,775 visas (later the claim was 580,000 visas) was far from the truth. It referred to the number of visas available during those years, not the number of visas issued. The State Department’s figure was more than twice the actual number. Before a congressional committee on November 26, 1943, Breckinridge Long of the State Department repeated the falsehood. He stated that “we have taken into this country since the beginning of the Hitler regime and the persecution of the Jews, until today, approximately 580,000 refugees.”

The press got hold of the facts and published them. The administration was embarrassed. Henry Morgenthau, Secretary of the Treasury, investigated the State Department’s handling of the refugees and issued a scathing report in January 1944:  “Report to the Secretary on the Acquiescence of This Government in the Murder of the Jews.” Breckinridge Long was forced to resign, his hand removed from the levers of bureaucratic power that determined the fate of so many. The War Refugee Board was established and the Swedish “diplomat” Raoul Wallenberg was dispatched to Budapest, where Eichmann was at work transporting the Hungarian Jews to Auschwitz. Wallenberg, with the help of others, managed to rescue 20,000 Jews in the final months of the war. In June 1944, President Roosevelt announced that the United States would accept 1,000 refugees. Most were Jewish. They were quartered at Fort Ontario, New York. Local people protested their presence.

The article quoted from a letter written by a Committee (?) to Under-Secretary of State Sumner Welles that heaped criticism on the Bermuda conference: the goals were “primarily exploratory,” no action was promised, Jews hadn’t been “consulted or invited,” the conference was “being held in an inaccessible place,”and only five reporters (hand-picked) were permitted to attend.

The Times-Picayune, April 19, 1943 – HITLER BIRTHDAY TO BE DIFFERENT, Americans Will Celebrate by Buying Bonds, (AP) p. 3

An article on page 1 of the April 26th issue of the Picayune described a “guide” published by the General Council of Churches of Christ in America. The guide, under the title “The Mass Murder of Jews in Europe,” was available for Christian churches to use at services on May 3, 1943, referred to as a day of compassion for Jews. “Of the approximately 600,000 Jews who were in Germany in 1939, according to the council, it is not it is estimated that not more than 40,000 remained at the end of 1942.”

The article on Bermuda in the April 28th issue of the Picayune was buried on page 13. Deferred was the decision to transport 5,000 Jews from Spain to French North Africa. Three places had been proposed as temporary places of refuge: French North Africa, “the Cireniaca area of Libya and the Diredawa region of Ethiopia.” The idea apparently was to send the refugees to places where the local governments were too weak to object. The two delegations failed to reach an agreement even here. Obtusely, the reporter concluded that the disposition of these refugees “was understood to be the only unsettled question” of the conference.

Bermuda was a replica of Evian. Nearly 190,000 openings in the U. S. quota went unfilled while the slaughter in Europe went unchecked.