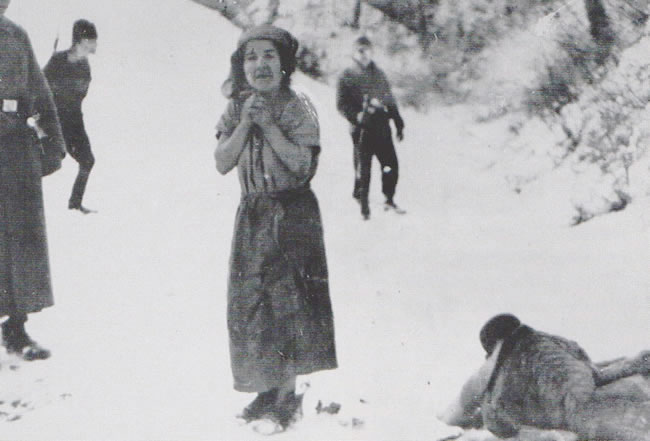 “In Poland, which has been made the principal Nazi slaughter house…”

–  UN declaration quoted in The Times-Picayune on December 18, 1942

In December 1942, when the United Nations War Crimes Declaration was issued, our survivor Eva Galler was starving to death in the Lubazcow ghetto, seven kilometers from her hometown.

On December 8, 1942, while Eva Galler awaited her fate in the ghetto, President Roosevelt met with Dr. Wise and five other representatives of the Jewish community. The meeting came two weeks after Sumner Welles confirmed to Dr. Wise that the extermination of the European Jews was underway, and it was the president’s only meeting with a Jewish group during the war. Dr. Wise read aloud from a two page letter that concluded “unless action is taken immediately, the Jews of Hitler Europe are doomed.”

The president replied that the “government of the United States is very well acquainted with most of the facts you are now bringing to our attention.” He agreed to issue a declaration on war crimes, making it clear that the Nazi criminals would be punished after the war. This led to the United Nations War Crimes Declaration. Officials in the State Department opposed the declaration and tried to scuttle it. The last thing they wanted was to get dragged into rescue. R. Borden Reams, in the Division of European Affairs, made that clear: “In addition the various Governments of the United Nations would expose themselves to increased pressure from all sides to do something more specific in order to aid these people.”

On December 17, 1942, the United Nations issued The War Crimes Declaration, which specifically addressed the Jewish catastrophe and promised retribution to the criminals:

“The attention of the Governments of Belgium, Czechoslovakia, Greece, Luxembourg, the Netherlands, Norway, Poland, the USA, the United Kingdom of Great Britain and Northern Ireland, the Union of Soviet Socialist Republics and Yugoslavia, and the French Committee of National Liberation, has been drawn to numerous reports from Europe that the German authorities, not content to denying to persons of Jewish race in all the territories over which their barbarous rule has been extended the most elementary human rights, are now carrying into effect Hitler’s often repeated intention to exterminate the Jewish people in Europe. From all the occupied countries Jews are being transported, in conditions of appalling horror and brutality, to Eastern Europe. In Poland, which has been made the principal Nazi slaughterhouse, the ghettos established by the Nazi invaders are being systematically emptied of all Jews except a few highly-skilled workers required for war industries. None of those taken away are ever heard of again. The able-bodies are slowly worked to death in labor camps. The infirm are left to die of exposure and starvation or are deliberately massacred in mass executions. The number of victims of these bloody cruelties is reckoned in many hundreds of thousands of entirely innocent men, women and children. The above-mentioned Governments and the French National Committee condemn in the strongest possible terms this bestial policy of cold-blooded extermination. They declare that such events can only strengthen the resolve of all freedom-loving people to overthrow the barbarous Hitlerite tyranny. They reaffirm their solemn resolution to ensure that those responsible for these crimes shall not escape retribution, and to press on with the necessary practical measures to this end.”

On December 18, 1942, the day after the UN’s announcement, The Times-Picayune published an AP article about the War Crimes Declaration, but the placement of the article on page 14 suggested the editors attached little interest and importance to it. For readers of the Picayune who made it to page 14, the UN’s Declaration on War Crimes left nothing to the imagination: the Germans “now are carrying into effect Hitler’s oft-repeated intention to exterminate the Jewish people in Europe.” Poland was “the principal Nazi slaughterhouse.” The ghettos “were being systematically emptied.” “None of those taken away are ever heard of again.”

Nothing came of the United Nations Declaration. Three weeks later, on January 8, 1943, Eva Galler jumped from a death train and sought refuge with Christian friends (one Polish, one Ukrainian).

In January 1943, the same month that Eva Galler jumped from the death train, Ruth Skorecki and her daughters Anne Levy and Lila Millen were smuggled out of the Warsaw Ghetto and given shelter by a Polish mother and daughter on the Aryan side.

Less than two months later, on March 1, 1943, a mass rally on behalf of the European Jews was held at Madison Square Garden in New York City.