Warning: Cannot modify header information - headers already sent by (output started at /home/content/90/2817590/html/southern5/index.php:2) in /home/content/90/2817590/html/southern5/wp-content/plugins/disable-xml-rpc-pingback/disable-xml-rpc-pingback.php on line 51
 Hitler Takes Prague - Teaching the Holocaust
Hit enter to search or ESC to close
What We Knew and When We Knew it 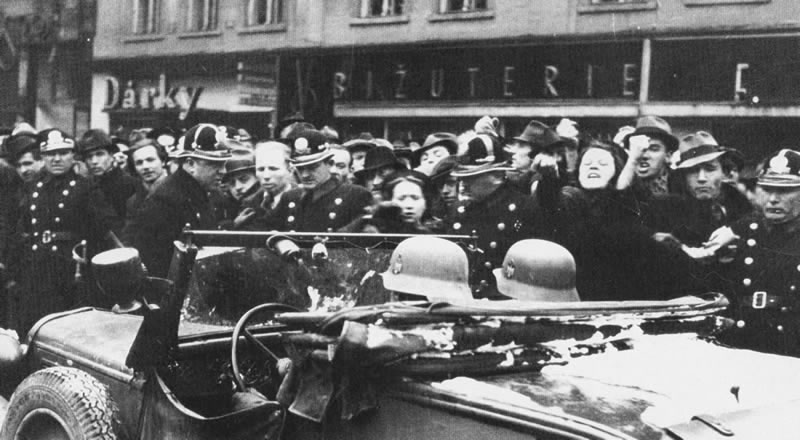 “Is this the end of one old adventure, or the beginning of a new?”

– Neville Chamberlain, quoted in The Times-Picayune
on March 18, 1939

Hitler was furious after Munich. He thought Chamberlain had cheated him of war at a time when Germany was still ahead in rearmament. The German leader quickly went to work on his plans to destroy the rump state of Czechoslovakia. On March 13, 1939, he received Jojtech Tuka, the Slovakian prime minister, and offered to guarantee the independence of Slovakia. The Slovak leader was only too happy for his country to become a satellite of the Greater German Reich. Not least of all, he agreed with the Nazi goal of murdering the Jews. The Slovak parliament declared independence on March 14, 1939 (it did so again in 1991).

In the early morning of March 15, 1939, Hitler received Czech Prime Minister Emil Hacha and demanded he hand over what remained of Czechoslovakia: the provinces of Bohemia and Moravia: “The military machine now already in motion could not be stopped. It was a grave decision, but he saw dawning the possibility of a long period of peace between the two peoples.” Old and in bad health, a judge from Habsburg times, Hacha was led to another room where Goering and Ribbentrop browbeat him to the point of collapse. Hitler’s physician (and drug supplier) Morel was on hand. He gave the Czechoslovak minister an injection and revived him (too much, Hitler joked). Hacha signed the documents handing over his country, which became the Protectorate of Bohemia and Moravia.

The German news release reported that Hacha, for the purpose of “the safeguarding of calm, order, and peace in this part of Central Europe,” had “confidently placed the fate of the Czech people and country in the hands of the Fuehrer of the German Reich. The Fuehrer accepted this declaration and expressed his intention of taking the Czech people under the protection of the German Reich and of guaranteeing them an autonomous development of their ethnic life as suited to their character.”

At six o’clock in the morning on March 15th, the German army

crossed the border and occupied Bohemia and Moravia (the SS arrived earlier). There was no resistance, only the nasty weather and brief street protests in Prague. Hitler spent the night at the castle in Prague. He had improved his strategic position but in doing so he had broken the promise he made at the Munich Conference that the Sudetenland was his last territorial demand.

The Times-Picayune reported Hitler’s seizure of Bohemia and Moravia with front page articles on March 18th and 19th.

The terror was amply described on March 18th, although buried on page 4:

Public opinion in England and France was outraged by Hitler’s latest aggression. Chamberlain wanted to look the other way, but he and his French counterpart Daladier were compelled to respond with meaningful action. In April, the English and French governments signed an agreement with Poland, Hitler’s next target, guaranteeing her independence. This led to the outbreak of World War II, after the German attack on Poland, six months later.

Hungary profitted from Hitler’s aggression. Parts of Slovakia and Carpatho-Ukraine, with joyful Hungarian minorities, were annexed after the Munich Conference in September 1938. The rest of Carpatho-Ukraine was annexed after the Germans took Bohemia and Moravia in March 1939. On August 30, 1940, as a result of the Second Vienna Award, Romania was forced to cede Northern Transylvania to Hungary (the Romanians repaid the Germans at Stalingrad). Our survivor Isaac Niederman, 17 years old at the time, remembers when the first Hungarian soldiers marched into his hometown, Satu-Mare: