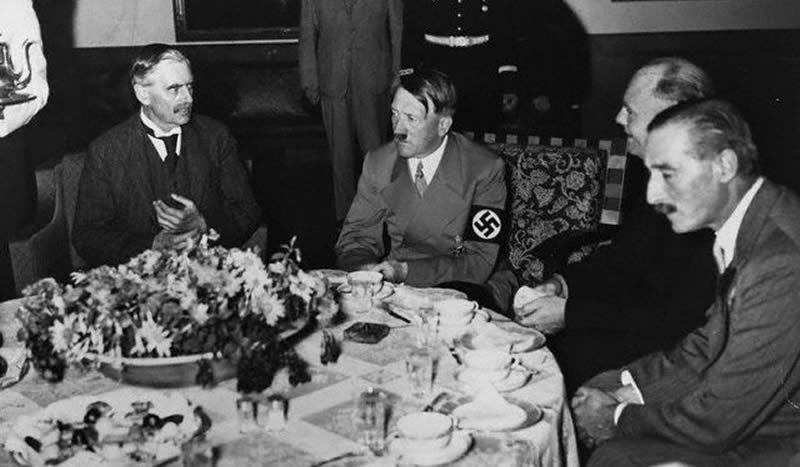 “…there is some reason and perhaps a little humanity still astray in Europe that holocaustic war is not to be fought over the technical aspects of a conceded question.”

Our survivor Dora (Slamowicz) Niederman was born in a small town in Carpatho-Ukraine, a province in the eastern hinterland of the newly founded Czechoslovak Republic. She was 11 years old in September 1938, when the fate of Czechoslovakia hung in the balance. As we’ll see, the decisions taken at the Munich Conference on September 29, 1938, led to a series of events that irrevocably changed her life.

Throughout the summer of 1938, Hitler increased his demands that Czechoslovakia hand over the Sudetenland, the border region that was heavily populated by ethnic Germans. Directed by local Nazis acting on orders from Berlin, the Sudeten Germans, who enjoyed minority rights in the Czechoslovak Republic, clamored for a “return” to the German Reich (to which they never belonged). Hitler used the alleged mistreatment of the Sudeten Germans to give naked aggression the appearance of “self-determination,” which, he piously reminded the world, was a guiding principle of the Versailles Treaty.

France was an ally of the Czechoslovak Republic. It had assisted in the construction of a string of fortifications in the Sudentenland, on the model of the (doomed) Maginot Line, to defend the young republic against Germany. England had no treaty with Czechoslovakia but was allied to France. Chamberlain and Daladier, the leaders of those two countries, wanted to avoid a war at all costs. The memories of the last war were vivid enough. Chamberlain decided on a policy of appeasement. After all, conservatives argued, the new Germany was a bulwark against Bolshevism. Better to get along with Hitler rather than fight him, even if appeasement meant the abandonment of a small, democratic, and newly independent country in Central Europe. With his umbrella in hand, Chamberlain flew to Germany (his first airplane ride) on September 15th and discussed the Sudetenland with the German leader at the Berghof, his mountain retreat overlooking Berchtesgaden. The German memorandum summarized Chamberlain’s opening remarks:

“He had frankly to admit that many Englishmen regarded the Fuehrer’s speeches solely as words behind which carefully prepared plans were concealed. He, however, looked on the Fuehrer as a man who, from a strong feeling for the sufferings of his people, had carried through the rebirth of the German nation with extraordinary success. He had the greatest respect for this man, and had come to Germany in order to attempt to solve the present difficulties by means of a frank exchange of views at the fountainhead of the German return to prosperity.”

They met again only days later at Godesberg, on the Rhine River. Chamberlain, with much satisfaction, informed Hitler that he could have the Sudetenland. The prime minister expected Hitler to be pleased. He had done exactly what Hitler demanded. But the German leader didn’t care one bit about the Sudeten Germans. He wanted to destroy Czechoslovakia. He wanted a war. In terms of rearmament, the timing was right. But Hitler made a big mistake. He let his demands be known. When Chamberlain met those demands, Hitler was at a loss. He had been outmaneuvered. How did he get out of this mess of his own making? He rejected what Chamberlain had handed him on a silver platter. These were his words: “I am very sorry but that is no longer acceptable.”

Chamberlain went home bewildered. The Czechoslovak army mobilized; the Czech people were united as never before (and never again). The world teetered on the brink of war. Chamberlain spoke over the radio to the Commonwealth on September 27th: “It seems still more impossible that a quarrel which has already been settled in principle should be the subject of war.” Hitler changed his mind on September 28th. The German people weren’t ready for war, he decided. His friend Mussolini wasn’t ready for war, either. Il Duce begged off. The British fleet mobilized, as did the French army (Europe’s largest). Hitler lost his nerve. He backed down, agreeing to meet Chamberlain at Munich, “the birthplace of Nazism,”  on September 29th. Mussolini and Daladier were invited to tag along. It would be a “four powers conference.” Mussolini was given the grand title of “mediator.”

The Times-Picayune gave considerable coverage to the Munich Conference. This included an editorial, two satirical cartoons, and articles dominating the front page on four consecutive days.

In Munich, late at night on September 29th and without consulting the Czechoslovak government, Daladier, Chamberlain, and the two dictators signed the document handing over the Sudetenland to Germany.

Three articles appeared in the issue of September 29th issue of the Picayune. One article commanded a headline across the top of the front page. A satirical cartoon depicting Hitler jumping from a building (“Don’t!”) was on page 10.

Czechoslovakia had been prepared to fight. The decision at Munich was a shock. “We were abandoned,” the commander of the Czechoslovak army told the nation. “We stand alone.”

Before Chamberlain left Munich on September 30th, he stopped at Hitler’s apartment “for a special two hour meeting” in which he asked the German leader to sign a document attesting to the desire of the two nations “never to go to war with each other again.” The reporter foolishly called it “a momentous supplementary agreement.” It was this unfortunate sheet of paper that Chamberlain held aloft on his return to London: “I believe this is peace in our times.” Chamberlain and Daladier were hailed by their countrymen. They had preserved the peace. Everyone sighed relief. The betrayal of Czechoslovakia to the Nazi beast was passed over. Churchill, out of office and out of favor, was among the few who criticized Chamberlain: “You had a choice between shame and war. You have chosen shame and you will get war.”

German troops occupied the Sudetenland on October 1, 1938. The Picayune’s front page article that day referred to 50,000 Social Democrats who had already fled to the rump state of Czechoslovakia.

The Picayune’s front page headline on October 2nd referred to “PEACE HOPES RUN HIGH” and “BOUQUETS GREET FORCE.” There was no reference to the Jews and Czechs who were expelled with few possessions (and, Hitler stipulated, no cows). Seven years later, in the aftermath of World War II, the Sudeten Germans would receive the same treatment, except they would be sent packing in the opposite direction, over the new border to bombed out Germany.

The archbishop of Prague was quoted on page 8. The country was “betrayed,” he said, and forced to accept to an unjust settlement “imposed by one ally and one friend.”

The military government in Poland took advantage of Prague’s “woe” and grabbed the disputed Teschen district. Many Poles expressed their approval, little appreciating that German guns now took aim at Poland from three sides. Hungary got its share of disputed territory. Hitler ceded part of Slovakia to his rapacious ally (First Vienna Award). Admiral Horthy rode a white horse into Kosice on November 11, 1938, to the acclaim of the Hungarian minority. Before the year ended, the Hungarians acquired part of Carpatho-Ukraine. They got the rest a few months later. That’s when the terror began, Dora recalls.

Hitler complained bitterly about the Munich agreement. He believed Chamberlain, by giving in to all his demands, cheated him of the most opportune time to have a war. Hitler lamented this for the rest of his life.