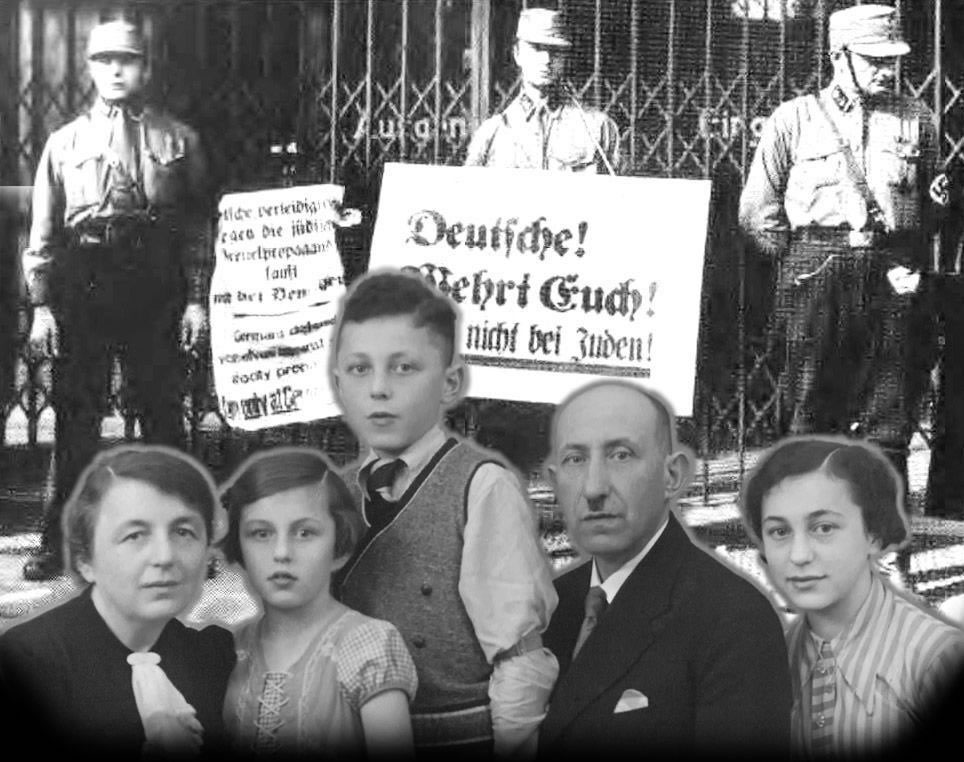 A Refugee Girl from Germany

AD 72 – Expelled from the Land of Israel by the Romans, the Jews begin a journey through the Diaspora, an existence in exile.

1096 and 1146-‘47 – Pogroms erupt during the crusades and Jewish communities in the Rhineland are wiped out.

1492 – Liselotte’s ancestors in Spain refuse to convert to Catholicism and are expelled. They migrate to England.

1621 – The prince of Wied (Herman II) invites persecuted minorities of Europe, including Liselotte’s ancestors, to settle in his principality on the Rhine River.

June 4, 1816 – Liselotte’s great-grandfather Philipp Levy is born in Anhausen, a village near Neuwied-on-the-Rhine.

1870 – Liselotte’s paternal grandfather Wilhelm Levy is a soldier in the Prussian army during the Franco-Prussian War, which results in the unification of Germany.

May 1906 – Amelia Greenwald runs away from home and applies for admission to Touro Infirmary’s Nursing School in New Orleans; she graduates in 1908.

1914-‘18 – Ferdinand Levy is a soldier in the German army and serves at Verdun and on the Eastern Front; he is awarded the Iron Cross for bravery.

October 1917 – The Bolsheviks, identified with Jews in the popular mind, seize power in Russia, and the “great fear” of communism grips Europe.

1918 – Amelia Greenwald joins Army Nurses Corps and is “chief nurse” in an evacuation hospital behind the front at Verdun.

November 9, 1918 – The Hohenzollern monarchy is replaced by a republic; communist revolutions break out across Germany.

1919 – Treaty of Versailles, with harsh terms imposed on Germany, is signed. Ferdinand and Rosa Levy are married and live with his father and step-mother in their home at Engersstrasse 12 in Neuwied.

February 24, 1924 – Hitler goes on trial for treason and is sentenced to prison. He dictates his autobiography Mein Kampf to a subordinate.

July 20, 1933 – Hitler signs concordat with the Vatican, gaining legitimacy in the eyes of many Germans.

1933-‘34 – Ferdinand and Mutti register the three children on U. S. quota and begin writing letters to Greenwald relatives in Kosciusko, Mississippi, but receive no reply.

1935 – A new postmaster takes over in the small town of McCool, in the same county (Attala) as Kosciusko. He forwards a letter from the Levys to their (second) cousins Ike and Julian Greenwald in Winnsboro, Louisiana.

March 26, 1935 – Liselotte leaves Zinzendorf School and enrolls in a “hand-work” school operating under the auspices of the Catholic Church.

1936 – Ferdinand’s sister Henny and her family immigrate to South Africa.

March 1936 – Liselotte leaves “hand-work” school and takes job as a maid/nannie in Bingen-on-the-Rhine.

November 4, 1937 – Ike Greenwald dies in Winnsboro but not before extracting a promise from his brother Julian and sisters Carrie and Amelia that they will rescue the Levy children from Hitler.

November 5, 1937 – Hossbach Conference in Berlin: Hitler informs his generals to prepare for a war in the near future.

February 15, 1938 – Amelia Greenwald writes U. S. Representative Ross Collins of Mississippi, who is a family friend. She requests his assistance in the immigration of the Levy children.

July 6, 1938 – Refugee conference on refugees, with thirty-three nations attending, opens at Evian, France; conference ends in failure as no country is willing to accept more Jews.

May 1938 – Ferdinand’s sister Selma, her husband Saul (Sally) Simon, and their son Arthur immigrate to the United States and live in Boston.

September 29-30, 1938 – At the Munich Conference, Czechoslovakia is forced by her “ally” France and “friend” England to hand over the Sudetenland to Hitler, stripping the one democracy in Central Europe of her fortifications.

October 5, 1938 – At the recommendation of the Swiss government, the Germans stamp Jewish passports with a large “J.”

Late October 1938 – Fifteen thousand Polish Jews in Germany are arrested and forced across the Polish border. Among them is Albert Gutreich, husband of Liselotte’s cousin Hedwig. With her baby (Ruth), Hedwig travels to Poland and is reunited with her husband. They end up in the Lodz ghetto.

November 9, 1938 – U. S. consulate in Stuttgart summons Liselotte and Leo to receive their visas. Liselotte is called home from Bingen. That night the Nazis rampage across Germany and newly annexed Austria and Sudetenland.

November 10, 1938 – In early morning hours, Levy home is ransacked and Ferdinand fatally beaten; Leo defends his father and is beaten; Liselotte arrives in Neuwied later that day, in midst of pogrom.

December 8, 1938 – Liselotte and Leo go to U. S. consulate in Stuttgart and obtain their visas.

December 1938 – Levy family is expelled from its home and forced to live in “Jew House” next door, along with other Jewish people kicked out of their homes.

January 15, 1939– Liselotte and Leo depart Neuwied for Hamburg where they board SS Manhattan for voyage to New York City.

January 29-31, 1939 – Liselotte and Leo travel by bus from New York City, across the Mason-Dixon Line, to Meridian, Mississippi.

January 30, 1939 – In speech to Reichstag, Hitler threatens the annihilation of European Jewry.

February 9, 1939 – The Wagner-Roger Bill proposes to admit twenty thousand refugee children who are fourteen years old or younger, outside the quota, during the next two years; Mutti registers Margot for a “children’s transport” to America.

February 12, 1939 – Liselotte meets Aunt Amelia and begins working in her dress shop; the two will live and work together for the next twenty-seven years.

March 14, 1939 – Hitler violates the Munich pact and seizes Bohemia and Moravia, completing the dismemberment of Czechoslovakia.

June 2, 1939 – The ocean liner St. Louis, with nine hundred and thirty Jewish refugees, is ordered out of Cuban waters. Denied landing rights in Florida, the St. Louis returns to Europe.

June 23, 1939 – Liselotte describes a “great party” and intimates “it was the best day of my life.” Her relationship with Bill Lerner blossoms, but Aunt Amelia disapproves of it.

September 27, 1939 – Warsaw surrenders to Germans; Poland is divided between Hitler and Stalin, and both intend to destroy the Polish elite and enslave the nation.

October 19, 1939 – In first deportation to the “east,” Jews from Mahrisch-Ostrau (in former Czechoslovakia) are sent to the village of Nisko in Nazi-occupied Poland.

February 1940 – Liselotte’s cousin Hedwig and her husband Albert Gutreich, with their child Ruth, are ordered into the Lodz ghetto.

February 12, 1940 – In freezing weather, Jews from Stettin, Germany, are deported to Lublin in Nazi-occupied Poland.

April-June 1940 – Hitler attacks and overwhelms countries in Western Europe. Lisbon becomes the most important port of embarkation; cost of traveling to the U. S. becomes exorbitant.

June 27, 1940 – The State Department’s Breckinridge Long suggests halting immigration “by simply advising our consuls to put every obstacle in the way and to resort to various administrative advices which would postpone and postpone the granting of the visas.”

September 1, 1940 – Leo bitterly complains to Liselotte that Uncle Julian has removed him from school so he can work longer hours in the store.

October 22, 1940 – With an hour’s notice, Jews in Pflaz region of Germany are deported to concentration camp at Gurs in southern France.

February 18, 1941 – Mutti writes Liselotte and Leo that the Hilfsverein (Aid Association of German Jews) has informed her to renew the “sponsorship applications” for herself and Margot as their quota numbers will be called in near future.

March 18, 1941 – Uncle Julian insists that the cost of boat tickets for Mutti and Margot “is entirely too much for us to spend.” Without his financial assistance, the rescue effort collapses.

May 27, 1941 – Mutti writes Aunt Amelia concerning the long-promised affidavits of support but receives no answer.

June 5, 1941 – State Department issues a new regulation: visas will be denied to anyone with close relatives in Germany or German-occupied territories; existing visas are revoked.

June 9, 1941 – Hedwig and her husband Albert in the Lodz ghetto receive package from Leo.

July 15, 1941 – The U. S. government closes its consulates in Germany; applicants are now required to send documents to the State Department.

July 31, 1941 – Based on Hitler’s instructions, Heydrich orders Eichmann to organize the destruction of the Jewish people in occupied- Europe.

October 27, 1941 – Max and Rosa Gans, Liselotte’s uncle and aunt in Elberfeld, Germany, are deported to the Lodz ghetto. Mutti writes her children that the Jews of Neuwied will be next. Aunt Amelia is stirred to action but it is too late.

February 2, 1942 – Leo turns eighteen. He runs away from Winnsboro and enlists in army, enraging Uncle Julian.

March 17, 1942 – Operation Reinhard, the murder of Polish Jewry, begins with the deportation of Jews in Lublin to the Belzec death camp.

March 22, 1942 – Mutti and Margot are deported to Izbica ghetto, near Belzec, in Nazi-occupied Poland.

April 22, 1942 – Transport of Jews from Trier, Germany, to Izbica ghetto includes Liselotte’s aunt and uncle Lina and Isidor Simon and their children Manfred, Jessica, and Willi.

July 27, 1942 – The last Jews in Neuwied are deported to Theresienstadt.

August 11, 1942 – The State Department suppresses contents of Riegner’s telegram that describes Hitler’s plan for the destruction of all the Jews in Europe.

August 28, 1942 – Rabbi Stephen Wise receives Riegner’s information by way of London; State Department persuades him not to publicize it.

November 24, 1942 – In official U. S. recognition of the Holocaust, Under-Secretary of State Sumner Welles hands over documents to Rabbi Stephen Wise that “confirm and justify your deepest fears.”

December 17, 1942 – U. N. Declaration on War Crimes is announced, emphasizing the murder of Jews and the punishment of war criminals.

March 1, 1943 – Speakers at a huge rally in Madison Square Garden demand that the Allied governments rescue the remaining Jews in Europe.

April 19, 1943 – Outbreak of revolt in the Warsaw ghetto; British and American delegates open refugee conference on island of Bermuda. One of the delegates later describes it as a “façade of inaction.”

November 1, 1943 – Meeting in Moscow, representatives of the three major Allied nations announce a post-war agenda; the Declaration on German Atrocities fails to include the Nazi annihilation of the Jews.

January 3, 1944 – Morgenthau’s report on State Department’s refugee policy is released, embarrassing the Roosevelt administration. The War Refugee Board is created.

Spring 1944 – Two Slovak Jews escape Auschwitz-Birkenau and bring details of camp (including number of victims) to Jewish leaders in Slovakia. Information is forwarded to Budapest but not shared with the Jewish population. It eventually reaches the West and is published in many newspapers, including The Times-Picayune.

August 15, 1944 – With the 7th Army, Leo lands in southern France and chases Germans up Rhone Valley.

May 8-9, 1945 – Germany surrenders to the Western Allies and to the Russians.

June 1945 – Leo gets word that Mutti and Margot have survived the war and informs Liselotte of same. He returns to Neuwied and learns that they did not survive after all.

July 1945 – Leo sends telegram informing Liselotte that Mutti and Margot did not survive after all.

1946 – Leo attends Boston University on GI Bill; he changes his surname to Lamson.

1950 – Leo works as a psychiatric counselor at Massachusetts State Hospital for the Criminally Insane at Bridgewater, near Boston.

1953 – Aunt Amelia officially adopts Liselotte; they move into a house on Walnut Street.

1981 – Liselotte is invited to Neuwied by Israeli-German Friendship Society.

February 6, 1983 – Leo Weil dies and is buried in Lafayette, Louisiana.

1984 – Leo (Levy) Lamson retires to Rockland, Maine; he and Liselotte spend summers together and discuss the past for the first time.

1986 – Liselotte moves to New Orleans and begins the third chapter of her life.

November 9, 1998 – On the 60th anniversary of Kristallnacht, a plaque honoring Ferdinand Levy is unveiled at site of his butcher shop in Neuwied.

October 11, 2013 – Liselotte dies in New Orleans and is buried next to her husband in Lafayette, Louisiana.