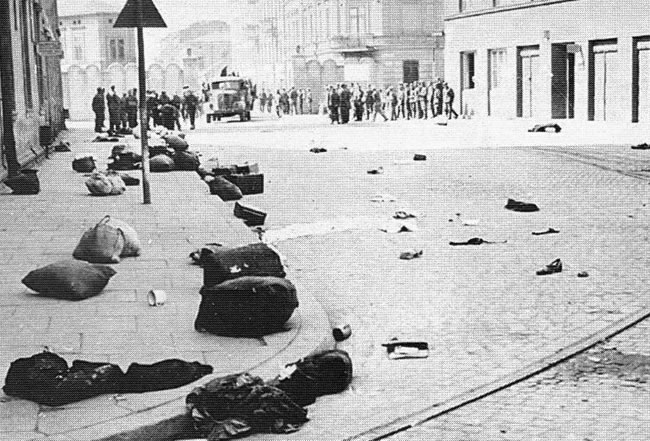 “…give evidence of our sincerity in this matter by making it plain that those who can be rescued now…will find sanctuary among us; that we will not erect barriers of red tape; that we will not pass the buck to the others.”

In March 1943, the same month as the “Stop Hitler Now” rally at Madison Square Garden, our survivor Siggy Boraks, 18 years old, was transferred from the liquidated ghetto in Czestochowa, Poland, to a labor camp at Blizyn, near Radom. He recounts his experience when another prisoner escaped from the camp:

The “Stop Hitler Now” rally was held on March 1, 1943. Twenty-one thousand people filled Madison Square Garden and 10,000 stood outside listening. This was the first massive rally in the United States for the European Jews. Speakers denounced the “Rescue through victory” policy of the Roosevelt administration. Herman Shulman of the American Jewish Congress reminded the audience that “months have passed since the United Nations issued their declaration denouncing the unspeakable atrocities of the Nazis against the Jews and threatening retribution,’ with the promise that ‘immediate practical steps would be taken to implement it,’ but that nothing has been done…” Proposals were heard: open the U. S. quota, open British controlled Palestine, negotiate an exchange with the Germans, and give sanctuary to the victims. When the Hebrew prayer for the dead was recited, the audience wept.

Two days after the “Stop Hitler Now” rally, The Times-Picayune carried a brief AP article on page 11 about it. In the context of the war, with so much to report from battlefields around the world, the editors of the Picayune decided that a rally protesting the murder of Jews wasn’t of public interest. At the rally, Sir Norman Angell, winner of the Nobel Prize and member of the Free World Association, expressed an opinion rarely heard. He “attributed a measure of responsibility to all nations of Christendom for atrocities against the Jewish people.” The rally was sponsored by the American Jewish Congress, the American Federation of Labor, the Congress of Industrial Organization, the Church Peace Union, and the Free World Association. On March 9, 1943, a memorial service in the form of a theatrical production, titled “We Will Never Die,” was held at Madison Square Garden. Kurt Weill prepared the original score, Ben Hecht wrote the script, and Edward G. Robinson co-narrated. Two weeks later, the Archbishop of Canterbury addressed the House of Lords:

“We have discussed the matter on the footing that we are not responsible for this great evil, that the burden lies on others. But it is always true that the obligation of decent men are decided for them by contingencies which they themselves did not create and very largely by the action of wicked men.”

On March 27, 1943, President Roosevelt met with Secretary of State Cordell Hull, British Foreign Secretary Anthony Eden, and British Ambassador to the U. S. Lord Halifax. Secretary Hull raised the subject of the 70,000 Jews in Bulgaria (he meant Romania). They were in danger of being deported to occupied Poland. Everyone knew what deportation meant. British Foreign Secretary Anthony Eden opposed any rescue efforts. He replied,

“The whole problem of the Jews in Europe is very difficult. We should move very cautiously about offering to take all the Jews out of a country like Bulgaria. If we do that then the Jews of the world will be wanting us to make similar offers in Poland and in Germany.”

The president didn’t object to Eden’s statement. No one did.

Three weeks later, British and American officials held a refugee conference on the island of Bermuda. Coincidentally, the Jewish revolt broke out in the Warsaw ghetto on the first day of the conference.