“And I couldn’t even go back to say, you know, goodbye to my family. I hadn’t seen them until now.” 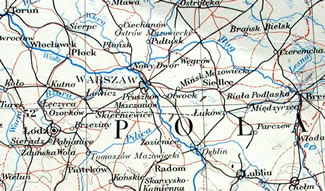 Martin Wasserman was born in Warsaw, Poland, on June 12, 1925. He lived with his parents, three brothers, and a sister in the Jewish district of the Polish capital (site of the future ghetto). He had many aunts, uncles, and cousins. His cousin Henry Wasserman went through the Nazis camps with Martin. They survived together and because of one another.

The Wassermans had been horse traders for several generations. They sold horses to the Austrian army. After Poland became independent in 1918, they supplied the Polish army. Martin grew up working with horses and was no stranger to hard work. He was small but very strong. Taut is a word that described him. He wasn’t a big talker.

Martin experienced many anti-Semitic incidents at school. He got into fistfights with the Polish students. He always stood his ground. He didn’t hear a slur without throwing a punch. During the war, Martin’s physical toughness would play a big part in his survival, combined with his determination to live enough to take revenge.

The Germans attacked Poland on September 1, 1939, and quickly overwhelmed the brave but antiquated Polish army. The Russians, in line with the Molotov-Ribbentrop Pact, grabbed the eastern half of Poland and began to administer the Soviet brand of murder, exploitation, and deportation. On September 27th, after three weeks of ferocious bombardment during which the Luftwaffe paid particular attention to the Jewish district, Warsaw surrendered. Martin was 14 years old. He watched the first Germans enter the rubble strewn city. They came on motorcycles. Early in the occupation, Martin was caught in a street round-up and sent to a labor camp in another city: “And I couldn’t even go back to say, you know, goodbye to my family. I hadn’t seen them ‘til now.”

Journey Through the Nazi Camps 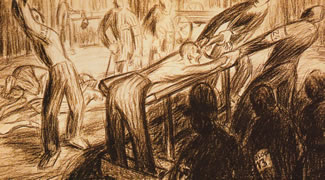 Martin was whipped several times during his five and a half years as a slave in the German camps.

The Nazis built labor camps in nearly every town in occupied Poland. Barbed wire wasn’t in short supply. They exploited Jewish and Polish labor to produce war material for the German army. Martin ended up in a labor camp in Radom, Poland. He worked producing scopes for rifles (carbines). Escape was impossible. The guards were brutal. Martin shares with us an extraordinary incident when he threatened a guard: “And I just told him, ‘Man, the war will not go on forever, and as soon as it’s over, we will be looking for you.’” The guard struck Martin in the head, “and I still have the marks.”

Threatening a guard was a sure way to get killed. Why did Martin do it? He explains, “Because you were so bitter and thinking what people doing to somebody who didn’t do nothing, and 14 [years old]. I didn’t do nothing to nobody. Why should I suffer?”

Food in the labor camps consisted of bread, black water, and potato peelings. The Jewish slaves were being worked to death on an empty stomach. At night they slipped into the German kitchen and stole food. Martin went with them. This was an act of resistance. It was much easier to give up. They were fighting for their lives. “But one time it didn’t work out too good,” Martin tells us. The Jews were caught in the kitchen and punished with 25 lashes, administered at roll-call in front of everybody, “and then they told us to go back in the barracks. And in the barracks, we couldn’t even stand up.”

Martin’s ability to withstand pain was extraordinary: “I’ve been in one place, they gave me 25 lashes and I walked off like nothing happened. They called me back and they told me that I didn’t feel nothing, you know, that they gonna give me 10 more.”

Martin spent only a day at Auschwitz-Birkenau. The Nazis made a “selection,” and Martin ended up in a labor camp at Wihingen, near Stuttgart, Germany. In this camp, Martin was struck in the head by a pipe-wielding guard. “This is when I seen the stars,” he recalls. At this same labor camp Martin encountered a German guard who gave him bread and looked after him: “I don’t know why. He was nice to me. I don’t know why. He always checked on me every morning.”

Who was that guard? Was he an older man not poisoned by the Nazi ideology? Or was he a young man who somehow retained a spark of humanity? The German people had been indoctrinated to hate. Compassion was a sign of weakness. Being decent to a prisoner was a crime against the German people.

At one point in the war, Martin was enslaved in a labor camp at Hesential, Germany.

Despite the unspeakable filth and misery, Martin managed to stay healthy during the five and a half years of war: “I don’t understand why. Now when something happens to me, I went to the doctor. And before, I didn’t worry about it and nothing happened. I never got sick one day.” 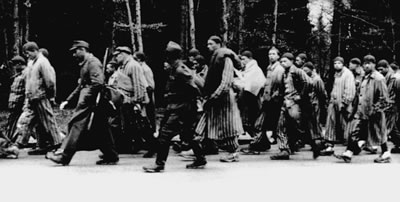 Towards the end of the war, Martin survived a death march to Dachau concentration camp, near Munich, Germany. Such was Martin’s physical strength that on this death march he was able to support his cousin Henry Wasserman and another prisoner. If not for Martin, they likely would have collapsed, and received a bullet in the head.

Martin was in a sub-camp of Dachau. He was attached to a “work commando” that took him outside the camp into civilian neighborhoods. The Jews were put to work removing the rubble left by the Allied bombing raids. Martin tells us that he slipped away and knocked on doors, begging for food. German civilians gave him bread, and the feeling someone cared about him: “When they [German civilians] gave you food, then it felt like somebody wants to help you. If they don’t give you no food, I feel like nobody even worrying about you. But if they come out and give you something, I felt like they really worry about me.”

Liberated by the Americans

American troops liberated Dachau on April 29, 1945, and fed the starving prisoners. Martin says that the prisoners were ravenous and “plenty of people” died from over-eating: “Everybody was pushing, and trying to get in, and they put their head in it. You couldn’t eat, we found out afterwards, you couldn’t go and eat too much at first.”

A group of liberated prisoners (not all Jewish) tracked down SS men and exacted revenge. Martin was among them. He says the Americans agreed to look the other way: “We did all kinds of things, trying to get revenge. For three days, anything we could do. And we felt better.” When confronted, the SS men “were scared, you know, when we had power. They were scared. When they were in power, we were scared. They were so scared, they even asked us, ‘Please, I have a mother and father and children.’ They didn’t ask me that [during the war].”

Life After the War

Except for his cousin Henry, no one in Martin’s family survived the war. “Nobody. I had uncles, father, mother, from mother’s side, from father’s side. Nobody.” If they managed to survive in the Warsaw ghetto until July 1942, they almost certainly ended up at Treblinka.

After the war, Martin worked for the U.S. Army in Germany. He immigrated to the United States in 1950. He arrived in New Orleans with $10 in his pocket. His hotel room that first night cost $7. When the Korean War broke out, Martin enlisted in the army and served as a weapons instructor at the Aberdeen Proving Grounds in Maryland. He spent eighteen months at Aberdeen, and it was here that he learned the English language. His first word was “hamburger.” Then came “hot dog.” Years later he would proudly tell people that he had once been named “Soldier of the Week.” The army gave Martin a sense of security, and a purpose: “And I really enjoyed it. I really appreciated what Americans did for me. I did everything what I could do. That’s the reason why I joined the service, to do my share.”

Martin married Diana in 1954. She was born in Belize, British Colombia, and Catholic. Their two sons and daughter were raised in the Catholic Church. Martin owned and operated a carburetor repair business in New Orleans: “I had to struggle for a while, and I didn’t want nobody to give me nothing.” 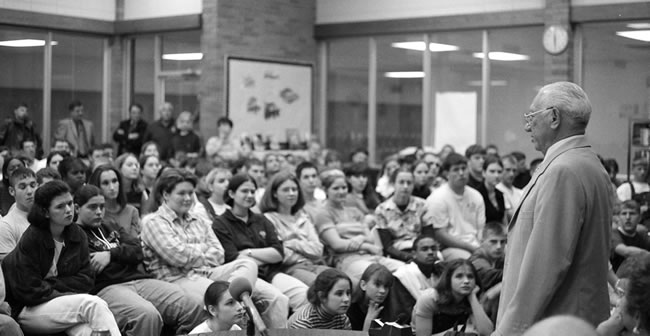 Survivor Shep Zitler encouraged Martin to speak out. He finally did in 1989. That was the year Holocaust-denier and former Klansman David Duke was elected to the Louisiana state legislature. Martin says, “Sometimes I think I would like to speak to David Duke. I wish he would come and tell me why he hates.”

Martin has only bad memories of Poland. He grew up there, suffered there, and lost his family there. Visiting Poland in his retirement years was the last thing he wanted to do: “I didn’t want to hear nothing about Poland. And my wife says, ‘Why don’t we go back and see the place?’ and I say, ‘I don’t want to go back because I don’t want to see the place. To memorize what I lost, my family, and all that.”

The war left Martin with no belief in God. For the rest of his life he would have nothing to do with the Jewish religion, although he believes that “there is somebody over us.”