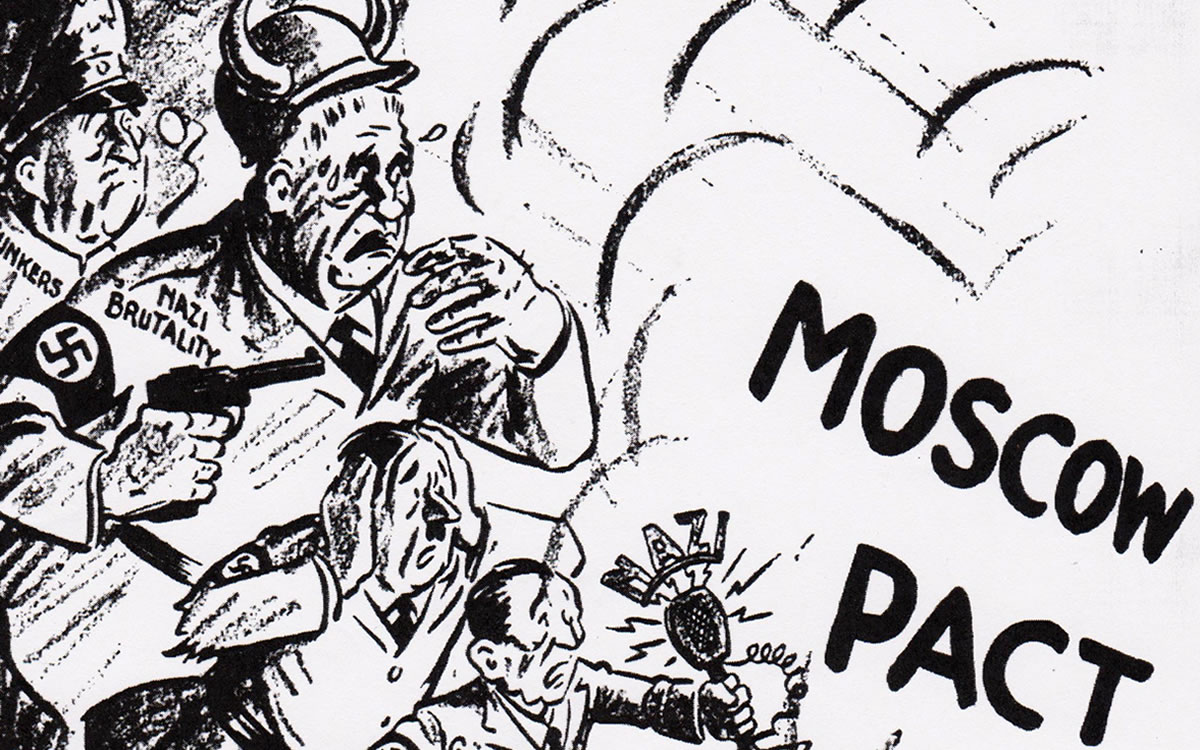 “Thus, Germans who take part in wholesale shooting of Polish officers or in the execution of French, Dutch, Belgian or Norwegian hostages or of Cretan peasants, or who have shared in slaughters inflicted on the people of Poland or in territories of the Soviet Union…”

– Declaration on German Atrocities, quoted in The Times-Picayune on November 2, 1943

In the autumn of 1943, when representatives of the three major Allies issued a Declaration on German Atrocities, our survivor Anne Levy and her family, living “illegally” on the Aryan side of Warsaw, were betrayed by a Polish neighbor. Anne was 8 years old.

The Allied representatives who met in Moscow in October-November 1943, to plan the post-war era, were U. S. Secretary of State Cordell Hull, British Foreign Secretary Anthony Eden, and Russian Foreign Minister V. Molotov. Their purpose was to make plans for the post-war era. By the autumn of 1943, the Red Army was approaching the prewar Polish border. It was a juggernaut that endured tremendous losses while rolling over German armies right and left. Russia was responsible for the turn of tide in the war. The Western Allies understood that all too clearly. They were dependent on Stalin. It was difficult for them to negotiate with a man to whom they owed so much. The Moscow Declaration, shared with the press on November 1, 1943, actually consisted of four declarations, one being The Declaration on German Atrocities. No more than a single paragraph in length, it was notable for what it didn’t say: a single word about the annihilation of the Jews.

The Times-Picayune reported the results of the Moscow Conference in an AP article on the front page of the November 1st issue.

The Allies pledged to finish the war against Germany and to maintain peaceful relations with one another after the war. Democracy would be returned to Italy and independence to Austria, which was considered “the first free country to fall victim to Hitlerite aggressions.” After 1945 those few words in the Moscow Declaration were repeated by many Austrians to deny their guilt and skirt responsibility (and reparations). The collaborator became the victim. The Declaration further stated that after Germany’s defeat the three Allies would “not employ their military forces within the territories of other states except for the purpose envisaged in this declaration and after joint consultations.” That was a promise Stalin wouldn’t keep. The Red Army conquered Central and Eastern Europe and remained there until the Berlin Wall came down in 1989.

The Declaration on German Atrocities made it clear that “the Germans” would pay for their crimes, “for most assuredly the three Allied Powers will pursue them to the uttermost ends of the earth and will deliver them to their accusers in order that justice may be done.” That turned out to be wishful thinking. Many of the German war criminals ended up working for the Americans during the Cold War. The former enemies became allies, and the former ally became the enemy.

Who were the guilty? They were “those German officers and men and members of the Nazi party” who were “responsible” or played a “consenting part” in “atrocities, massacres, and execution.” Nothing untoward was said about the countries that collaborated with the Nazis. Why? The Allies wanted to detach these countries from the Axis.

Who were the victims? In the key passages of The Declaration on German Atrocities, they are listed: Italian officers (7,000 were executed when Mussolini was overthrown in 1943), hostages in France, Holland, Belgium, and Norway, the “people of Poland and the territories of the Soviet Union,” also the people of Czechoslovakia, Yugoslavia, Norway, Denmark, the Netherlands, Belgium, Luxembourg, France, Italy, and Greece, “including Crete and other islands.” The island of Crete (“Cretan peasants”) was mentioned twice. Jews not once. This wasn’t by accident.

The British and Americans didn’t want to give publicity to Jewish suffering because they didn’t want to be compelled to do something about it, and the Russians didn’t distinguish between Russian suffering and Jewish suffering. All suffering was Russian. And none of the Allies wanted to be accused by its own people of fighting the war on behalf of the Jews, which was the line the Nazis repeated endlessly. No need to give Goebbels material for his propaganda.

For advocates of Jewish rescue, as the AP article on page 6 of the Picayune attests, the Declaration on German Atrocities was a bitter disappointment. Their efforts had failed. How could the remaining Jews in Europe be saved if they couldn’t be mentioned?