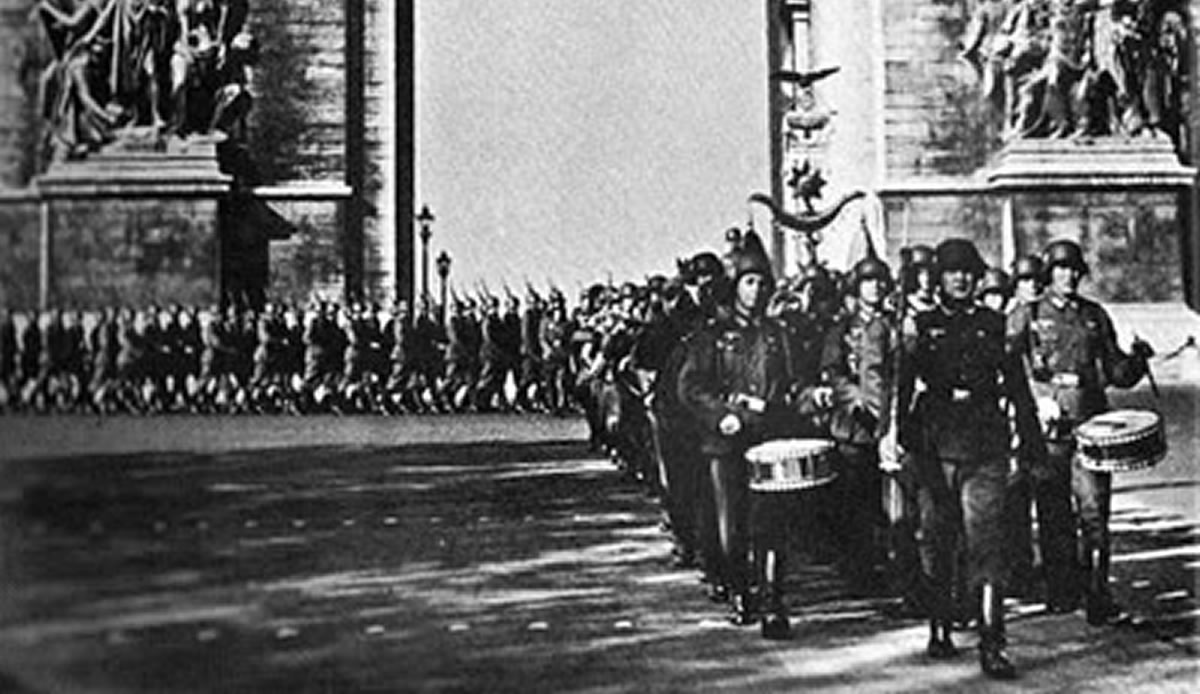 German troops at the Arc De Triomphe, a daily rirtual

“In full stride, the British got rid of the shaky government of Prime Minister Neville Chamberlain, replacing him with the belligerent Winston Churchill…”

After the “September campaign” in Poland, Hitler wanted to attack Western Europe immediately. He was compelled by his generals and the weather to wait until the spring of 1940. On April 9th, the Germans seized Denmark and landed troops in Norway. The Times-Picayune provided detailed coverage of the German assault on Western Europe:

On May 10th, the Germans opened the offensive in the Low Countries and France. The Blitzkrieg was devastating. Belgium’s “impregnable” Fort Eben Emael, the mainstay of its defense, was pounced upon by German airborne troops. German armor unexpectedly poured through the Ardennes Forest. King Leopold of Belgium abruptly surrendered on May 27-28th, exposing the British and French troops to a heavy blow. They withdrew to the port of Dunkirk.

Only one of our survivors lived in Western Europe. Jeannine Burk was born in Brussels, Belgium, on September 15, 1939. When the Germans marched into Brussels in May 1940, she was 8 months old. Jeannine would live the first five years of her life under German occupation, two in hiding.

As the Germans advanced across Western Europe, our survivor Felicia Fuksman turned 20 in the Lodz ghetto, where Nazi violence was out in the open and dehumanization to break the spirit of the victims preceded physical destruction:

On June something 1940, two weeks after Felicia’s birthday in the Lodz ghetto, the British, as a result of Hitler’s blunder at Dunkirk, avoided destruction and got away. On June 22nd, the French signed the armistice at Compiegne, where (by no coincidence) the Germans had signed the armistice on November 11, 1918, ending the First World War. For the Germans, the humiliation of 1918 was erased. The Fuehrer of the new Germany had done in six weeks what the Kaiser had failed to do in four years. Hitler’s popularity reached new heights. He now directed his gaze at the Soviet Union.