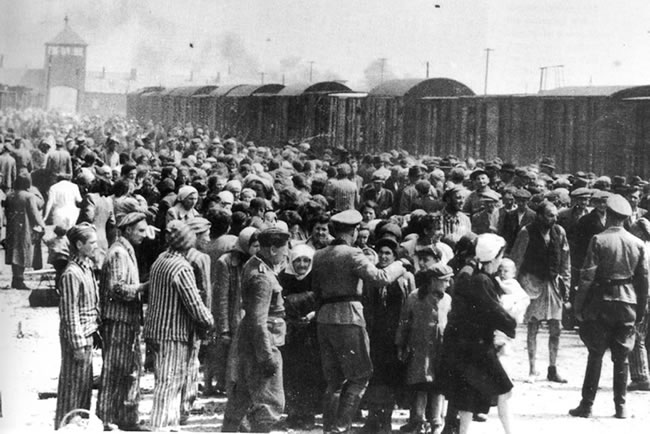 “Execution halls at Auschwitz and Birkenau were said to be fake bathing establishments capable of dispatching 2000 to 8000 Jews daily.”

The 400,000 Jews in Hungary and its annexed territories were deported to Auschwitz-Birkenau in a lightening operation that began on May 15, 1944, and lasted a mere seven weeks. Our survivor Dora Niederman and her family, in the far eastern zone, were on an early transport to Nazi-occupied Poland.

On March 19, 1944, the Germans occupied Hungary and installed collaborators in the government. Although an ally of the Germans and anti-Semitic to the core, the Hungarian leader Horthy had refused Hitler’s entreaties to deport the Hungarian Jews to Poland. He knew what deportation to Poland meant. He wanted to get rid of the Jews but not by murdering them. After the German takeover, Horthy remained as head of the new government.

The systematic annihilation of European Jewry had been underway since 1941. It wasn’t a secret. The world knew but the majority of the Hungarian Jews didn’t. Far removed from the war, living in relative tranquility, they had no idea that mass murder swirled on the periphery and had already taken a ghastly toll on European Jewry, or that the Hungarian Jews were the last intact Jewish community in Europe. The Germans, having engaged in murder and looting since 1933, were well rehearsed. They wasted no time. Jews were registered, inventoried, marked with the Star of David, robbed, terrorized, concentrated in ghettos, and then loaded on cattle wagons for “resettlement.”

Dora recounts her time in the ghetto, her tortuous journey by train, and her arrival at Auschwitz-Birkenau:

Based on a report provided by two Slovak Jews, Rudolf Vrba and Alfred Wetzler, who escaped from Auschwitz-Birkenau in April 1944, precise and chilling details about the death camp, suppressed by Jewish leaders in Brno and Budapest, eventually reached newspapers in the United States.

On July 4, 1944, The Times-Picayune published an article describing the Hungarian deportations. Despite the graphic headline, the article wasn’t newsworthy enough for the front page and instead was relegated to page 2. Quoted was a report from Geneva, Switzerland, stating that 1,715,000 Jews had been gassed in the “Upper Silesian ‘extermination camps’ at Auschwitz and Birkenau…” The victims came from Poland, Holland, Greece, France, Belgium, Germany, Yugoslavia, Italy, Norway, Bohemia and Moravia, Slovakia, and Austria. Among them were “foreign Jews from Polish concentration camps.” “Yet another 120,000 Jews from Hungary were said to have been killed or died en route to Upper Silesia.” The Hungarian Jews were subjected to “malicious, fiendish, in humane brutality.” Gas chambers were disguised as “fake bathing establishments capable of dispatching two thousand to eight thousand Jews daily.” The victims “were led into cells and ordered to strip for bathing, then cyanide gas was said to have been released, causing death in three to five minutes.”

On the same day that this article appeared in the Picayune, John McCloy, Assistant Secretary of the U. S. War Department, rejected a request to bomb the railroad line on which Jews were transported from Hungary to Auschwitz-Birkenau. The “suggested air operation is impracticable,” McCloy wrote Pehl of the War Refugee Board, and “in any case would be of such doubtful efficacy that it would not amount to a practical project.”

On July 9th, Horthy defied the Germans and stopped the deportations. International pressure to do so was intense, with appeals coming President Roosevelt, Pope Pius XII, and the king of Sweden.

In August and September 1944,  American heavy bombers from Brindisi, Italy, following the same railroad line carrying Jews from Hungary to Auschwitz-Birkenau, bombed the German factories (producing synthetic fuel) at Buna, near Auschwitz-Birkenau. On one flight the automatic camera on an American plane activated prematurely and snapped photographs of the death camp.

As Dora tells us, the Allied planes flew directly overhead:

On July 8, 1944, The Times-Picayune ran an editorial about the Hungarian transports to Auschwitz-Birkena. It referred to “the notorious extermination camps in Upper Silesia” and called for the punishment of “the Hungarian accomplices.” Nothing was said about the Allies bombing the railroad tracks or attempting rescue efforts. But the editor agreed that the Allies issue “a stern protest and warning” to the perpetrators: “Certainly it is worth trying.”

While the trainloads of Hungarian Jews were deported to Auschwitz-Birkenau, the German army was engaged in desperate battles on the Eastern Front, trying to stop the Red Army. Despite the urgent situation, trains carrying Jews to the gas chambers enjoyed precedence over trains carrying troops and war material to the front. Historian David Wyman concluded: “To kill the Jews, the Nazis were willing to weaken their capacity to fight the war. The U. S. and its allies, however, were willing to attempt nothing to save them.”