Hit enter to search or ESC to close
Dora Niederman

“We were a small town, between the hills, and nobody came there to tell us how some things were.” 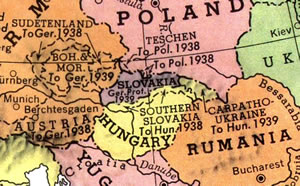 Dora Niederman (Zalmonovich) was born on May 16, 1927, in Bhuce, a town in the Carpatho-Ukraine region of the newly independent Czechoslovak Republic. Five hundred families lived in Bhuce. The Jews lived in the town, and the Slovaks and (mostly) Ukrainians on the outskirts. Dora’s mother Chaya Pearl (Berkovich) was a beloved figure. Jews and Christians came to her for advice. Even the geese loved her. Dora’s father David Zalmonovich died of tuberculosis before her birth. Chaya Pearl then married Israel Schlomovich and moved with Dora to Nagaf (Yargof). Israel was in the import-export business (fruit and grain). Dora inherited one step-brother and three step-sisters. She recollects that the relationship between Jews and Christians was very good. Fear wasn’t part of her childhood.

The Germans and Hungarians Arrive

In 1939, after Hitler seized Bohemia and Moravia and completed the destruction of Czechoslovakia, Dora’s region was handed over to fascist Hungary. This country was an eager and rapacious ally of the Nazis. It wanted to recover lost territories and Hitler obliged. Dora’s step-father was seized by Hungarian police and beaten to within an inch of his life: “We didn’t even know who the man was when he walked in the house. His voice we recognized, by his voice.” Between 1939 and 1944, while Jewish communities in one country after another were deported to the “east” and murdered, the Jews in Hungary lived in relative tranquility. They were untouched by the war and unaware of the Holocaust. As Dora says, “We were a small town, between the hills, and nobody came there to tell us how some things were.”

On March 19, 1944, German troops occupied Hungary. Dora was 16 (in her documentary she says 11). Her teacher, a Christian, was an early victim. His body was left for public viewing, a warning to those who would dare to act on loyalty and help the Jews. The usual procedure followed. Jews were registered, ordered to wear the Star of David patch, robbed of everything, and concentrated in a ghetto, near a railroad line, where they were beaten and starved. Dora describes the night the Germans, with the Hungarian police, ordered the Jews out of their homes and into the ghetto: “We was all sleeping, and they woke us up in the middle of the night and they made us get up and just leave the house just like we were, in night gowns. They let us finally put dress on, and our shoes.”

The Jews in Nagaf remained in the ghetto for a short time. The day came when the Germans and Hungarians, whips in hand, ordered the Jews to the train and into into boxcars. The Jews had no idea where they were going. They had never heard of Auschwitz. Gas chambers didn’t enter the imagination. The first transport left for the unknown on May 15th.

Deportation of Hungarian Jews to Auschwitz-Birkenau in 1944. Several men, not suspecting what awaited them in occupied-Poland, were dressed in coats and ties.

The deportation of the Hungarian Jews to Auschwitz-Birkenau in the last year of the war took place with lightning speed, and before the eyes of the world. It was reported in U.S. newspapers. The July 4th issue of The Times-Picayune carried a detailed article about Auschwitz on page 2. World leaders sent messages to Budapest urging Prime Minister Horthy to stop the deportations. He obliged on July 9th. Eichmann, naturally, was furious. Less than two months had passed since the first transport left for occupied-Poland. The victims numbered 434,351.

Dora describes the tortuous three day journey, in terrible heat, across Slovakia and over the Carpathian Mountains to occupied Poland: “You couldn’t sleep. You couldn’t sit. You couldn’t use the bathroom. It was undescribable.”

Arrival of Hungarian Jews at Birkenau and ‘selection’ on the ‘ramp’

Dora and seven girls from home (in the documentary Dora says it was six girls) stuck together. The shared food. Two other girls joined the group. Only after she arrived at Birkenau did Dora learn that Jews were being gassed: “It was a horrible smell. Like ashes. Like tar. Even today if I go someplace, I can’t smell tar. It makes me deathly sick.”

Dr. Josef Mengele (the “Angel of Death”) conducted “selections” twice a day during roll-call (appel). He wasn’t the only German doctor at Auschwitz. The place was virtually run by doctors. Hitler’s racist theories found many believers in the medical profession. Mengele called Auschwitz “applied biology.” Dora got a close look at him: “Every morning and every night he came. And he was as close to me and to all of us like you are, and he had a little stick [baton]. And you went this way or this way.”

As the transports rolled from Hungary to Auschwitz, John Pehl of the War Refugee Board requested that American planes bomb the railroad lines between Hungary and Auschwitz. The War Department (Pentagon) rejected the request. The operation, it said, would be of “very doubtful efficacy.” The only way to rescue the Jews was to win the war.

Dora remembers when American bombers (not English bombers, as she says) flew over Auschwitz to bomb nearby German factories: “And every night we used to hold each other to our hands and we pray, ‘Please God, throw a bomb on us. Please let us not be suffering no more.’” 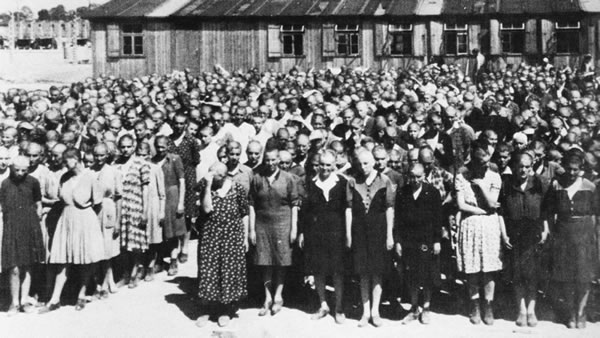 Hungarian women at Birkenau in 1944

Dora was in Birkenau for three or four months. She gives us a vivid account of daily existence in the camp: “We had about twenty-five girls sleeping in one bed. And when one turned, we all had to turn. One couldn’t turn without the other ‘cause it was like herrings pressed together.” During roll-call, Mengele observed rashes on Dora’s legs. He ordered her to the camp’s “hospital.” Intuition told Dora if she remained in the “hospital” she would end up in the gas chamber. “So I got separated from the girls, and I really didn’t know what to do.” She slipped away from the hospital and rejoined her friends. That very night they were awoken and taken to Stutthof, a concentration camp on the Baltic coast, in East Prussia. “It was not my time to die,” Dora says.

Dora describes her arrival at Stutthof: “The same thing, the SS with the guns, with the dogs. Where we going to go? We didn’t even know where we were. Where we going to run away? But still they brought the dogs.” The Germans made elaborate preparations for a Red Cross visit. In the fourth year of war, the Germans tried to refute the reports of “death camps,” and enlisted the cooperation of the Red Cross.

In the late summer of 1944, Dora and her girlfriends were requisitioned to work on a German farm, helping to bring in the harvest. A German farmer agreed to take all ten girls. As Dora tells us, the German farmer treated them very well: “He always fixed us nice food. He was the nicest person you ever wanted to be with…He was good to us. Thanks to him today I think the ones who have survived, today living because of that.”

One step ahead of the advancing Red Army, the Germans evacuated Stutthof in January 1945. Jews were gunned down on the shores of the Baltic Sea. Dora and her friends escaped from a “death march” and found shelter with a Polish family. The girls said they were from Ukraine, but the Polish farmer wasn’t fooled. He hid the ten Jewish girls in his attic, out of sight of his neighbors. Whoever this Polish farmer was, he took a big risk for people he didn’t know. Dora was liberated by the Red Army. One painful chapter followed another: “The Russians came in and they was raping everybody. They were first-line. They came in. They were horrible people.”

Life After the War

When the war ended, Dora took a train to Budapest. One of her step-sisters was there. She also survived Auschwitz. On the street in Budapest Dora happened to pass her step-brother on the sidewalk. They didn’t recognize one another until later that day, when they met at the step-sister’s apartment: “We both start crying, that we passed each other on the street and we didn’t even know who we were. This what the Germans did to us. I had no hair, must have weighed maybe fifty pounds. He was still so skinny, too.”

Dora returned to Bhuce, her hometown. The house was in ruins. Her mother’s geese were in the neigbhor’s yard. Dora called for them and they came running. She next traveled (illegally) to a “Displaced Persons” camp at Santa Maria del Lauca, Italy. 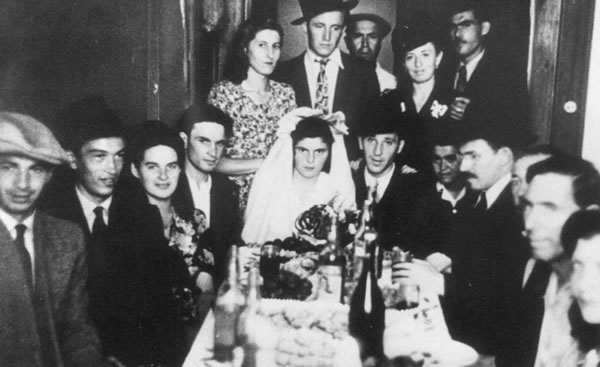 In this far-away setting she met Isaac Niederman, a survivor from Satu-Mare, Romania. They tried several times to reach Palestine but the British turned them back. By the time the state of Israel was established in May 1948, Dora and Isaac had received visas for the United States. They got married on September 3, 1948, and arrived in New Orleans on May 17, 1950. For 57 years, Isaac worked as a silver polisher at Adler’s Fine Jewelry on Canal Street.

Dora Niederman at the Parkview Apartments in New Orleans

Dora operated a dry cleaning establishment. Because of the war, she was unable to bear children.

Dora didn’t talk about the war for fifty years. She broke her silence in 1989. David Duke was elected to the Louisiana legislature that year. He’s a neo-Nazi and, it goes without saying, a Holocaust denier. Duke ran for Louisiana governor and for the U. S. Senate. He lost each time, but took home the majority of the white vote.

For many years, Dora traveled with the Southern Institute to schools and workshops, sharing her experiences. Her message to students was delivered with her mother and step-father in mind: “When they go home at night, to tell their parents how much they love them, and to hug them and kiss them. When they go to school or to work to tell them same thing again: ‘We love you.’”