Hit enter to search or ESC to close
Themes

Our survivor Lila Millen “passed” as a Catholic child for two years in Nazi-occupied Warsaw, starting when she was 5 years old. Only after the war did her father tell her she was Jewish. She had no idea what that meant, but the thought scared her. In Poland during the war everything she had heard about Jews was negative. Lila absorbed all that. Inadvertently, she became an anti-Semite. 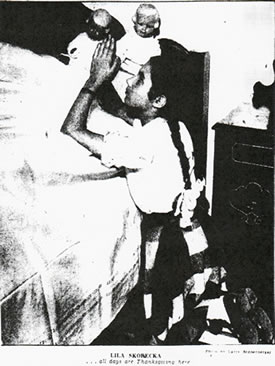 The Skorecki family arrived in New Orleans in November 1949, only days before Thanksgiving. A reporter and photographer from the New Orleans Item came by to interview the newcomers.

When the photographer asked Lila to pose, she knelt beside her bed and held her hands in prayer, as she had done when “passing” as a Catholic child in Nazi occupied Warsaw.