After the war a number of Holocaust survivors immigrated to the United States and ended up in New Orleans. The local Jews weren’t always receptive. The survivors worked hard and raised their families. They didn’t talk about the past, and nobody asked. How could Americans possibly understand? There was awkward silence when the children of the survivors asked why their friends had aunts and uncles but they didn’t. The Eichmann trial in 1961 made it impossible to keep the memories suppressed. 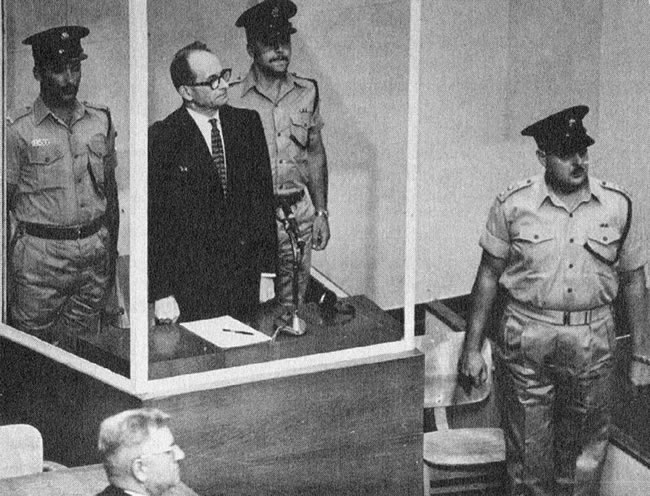 Eichmann on trial in Jerusalem

That same year George Lincoln Rockwell of the American Nazi Party came to New Orleans on a “hate ride” (imitating the Freedom Riders). The survivors were ready. They met at Ralph Rosenblatt’s butcher shop and planned a response. When Rockwell and 12 “storm troopers” attempted to stage a protest of the movie Exodus, playing at the Civic Theater in downtown New Orleans, the survivors came walking down the street armed with iron bars, baseball bats, and over 20 years of rage.

In 1989, on the 50th anniversary of the war, the survivors were again enraged when another Holocaust denier appeared on the scene. David Duke, neo-Nazi and former Klansman, was elected to the Louisiana legislature. Many survivors opened up about the past for the first time. They were ready to talk, and the Southern Institute was ready to listen. Under the direction of Lance Hill, we produced the documentary series Ten Stories of Holocaust Survivors in New Orleans. Seven of the survivors were born in Poland, and one each in Romania, Czechoslovakia, and Belgium. Two were in Auschwitz-Birkenau at the same time. One jumped from a “death train.” Another survived four years in the Lodz ghetto. One was a prisoner-of-war. Two survived “passing” as Polish Catholics. Three were “hidden children,” including two sisters in the Warsaw ghetto. Eight of the ten received help from Christians. One was was rescued by the Swedish “diplomat” Raoul Wallenberg in Budapest.

The survivors have Poland in common. This land was the setting of the Holocaust. Here their loved ones were murdered.