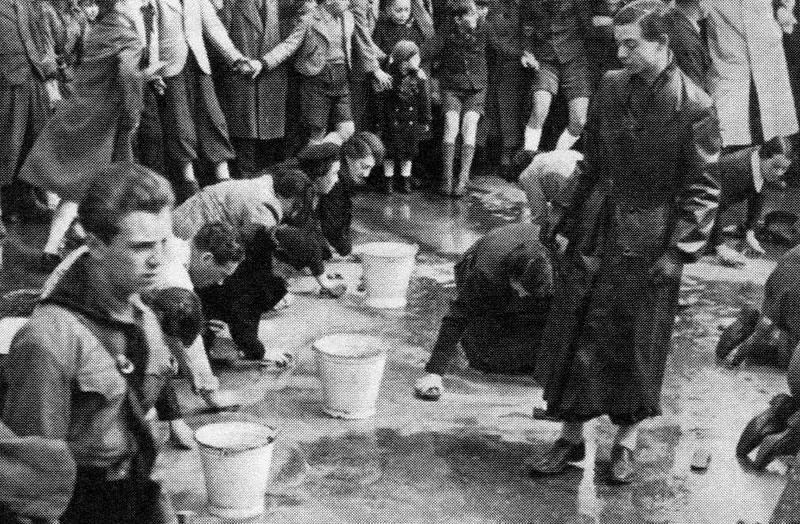 “You all live up to your oath from Koenigsburg to Hamburg and down to Vienna. You do so in deepest emotions.”

– Hitler, from his hotel balcony in Vienna to overflowing crowds, quoted in The Times-Picayune, March 15, 1938

On March 11, 1938, Hitler ordered the German armed forces to seize and occupy his native Austria. Two days later he announced the Anschluss, or union of Austria (now the Ostmark) withe the German Reich. Hitler had called for the Anschluss on the first page of his autobiography My Struggle. German troops (who ran out of petrol on the highway to Vienna) were greeted by flowers. Anschluss would be “the flower war.” The Jews of Vienna were treated to a different kind of war. The Jewish writer Stefan Zweig described it: “All the morbidly filthy hate fantasies orgiastically conceived in the course of many nights were released in broad daylight.

The greed in Vienna ran out of control. The Nazis stepped on one another to get at the fabled Jewish gold. It was all about improving one’s station in life without breaking a sweat.

The Times-Picayune published front page articles by The Associated Press and the International News Service that fully captured the wild enthusiasm that greeted Hitler in Vienna:

Despite the headline “JEWS IN AUSTRIA PLEAD FOR HAVEN IN UNITED STATES,” the article included no information of this kind. It gave a sanitized version of the circumstances in which the Viennese Jews found themselves: “Jews were disappearing from Vienna life. Few, if any, were to be seen on the streets or in the coffee houses. Jews were asked to leave streetcars. Some were not molested if they gave the Hitler salute.”

Hitler arrived in Vienna on March 14, 1938. Church bells were peeling as he entered the city. The swastika flew from the archbishop’s palace.

The Times-Picayune published an editorial on March 14, 1938, concluding that “Hitler is sure this latest conquest will not be forcibly challenged – and doubtless already is planning his next.”

The “frenzied thousands” lined Hitler’s route to Vienna. Outside the Imperial Hotel the crowds were “cheering with a zeal that amounted to religious fervor.” He spoke from the balcony: “You all live up to your oath from Koenigsburg to Hamburg and down to Vienna. You do so in deepest emotions.”Hitler proclaimed, “The German Reich as it stands today is inviolable. No one can shatter us.”

The Nazi terror unleashed on the Jewish community was recounted in an AP article (page 3) on March 15, 1938: “The world of Austria’s Jews fell around their shoulders. Thousands attempted to flee. Physicians and lawyers were prevented from practicing. Jewish stores were plundered. Jews were beaten and arrested. The Jewish residential districts were on in a panic.”

The terror was far worse than depicted in the Picayune’s articles. William Shirer, a CBS radio correspondent in Vienna, witnessed the first days of the Anschluss:

“For the first few weeks the behavior of the Viennese Nazis was worse than anything I had seen in Germany. There was an orgy of sadism. Day after day large numbers of Jewish men and women could be seen scrubbing Schuschnigg [former Austrian chancellor] signs off the sidewalk and cleaning gutters. While they worked on their hands and knees with jeering storm troopers standing over them, crowds gathered to taunt them. Hundreds of Jews, men and women, were picked off the streets and put to work cleaning public latrines and the toilets of the barracks where the SA and the SS were quartered. Tens of thousands more were jailed. Their worldly possessions were confiscated or stolen. I myself, from our apartment in the Plosselgasse, watched squads of S.S. men carting off silver, tapestries, paintings and other loot from the Rothschild palace next door.”

Absent from the Picayune‘s coverage was any reference to the hundreds of Jewish people who committed suicide. The Nazis chortled about these suicides and listed them in their own newspapers as “Traffic accidents.”

The Times-Picayune published an editorial on March 15, 1938, suggesting that Great Britain, in light of Hitler’s seizure of Austria, was reconsidering its policy of appeasement. The editors were far off the mark, as the Munich Conference would demonstrate six months later.

A political cartoon on the editorial page depicted the Anschluss in a way that words couldn’t.

Hitler spoke at the Heldenplatz on March 15, 1938, before a crowd of 250,000 screaming Viennese: “In this hour I report to the German people the greatest achievement of my life. As leader and chancellor of the great German nation and of the Reich, I declare to declare to history the entrance of my native land into the German Reich.”

This photograph, published in the Picayune four months after the Anschluss, shows the insidious Nazi propaganda at work.

March 24, 1938 – President Roosevelt calls for a conference of thirty-three nations to address the refugee crisis.

May 6, 1938 – Less than two months after the Anschluss, our survivor Isaac Niederman, in Satu-Mare, Romania, celebrates his 14th birthday. His parents grew up in the Austro-Hungarian Empire. They had fond memories of Kaiser Franz Josef. In their minds, Vienna was still the glittering imperial capital.

Isaac reminds us that long before Hitler came to town, anti-Semitism was part of the landscape: