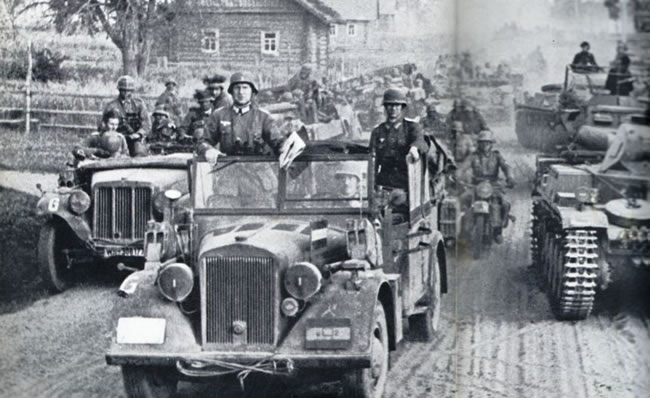 “It is necessary for us to take steps against this plot devised by the Jewish Anglo-Saxon warmongers.”

Our survivor Eva Galler lived under harsh Russian occupation for 18 months (September 1939-June 1941). Her hometown of Oleszyce, Poland, was briefly (and cruelly) occupied by the Germans for two weeks in September 1939. They turned it over to the Russians on September 27th, once the new German-Russian border was adjusted. The Germans returned to Oleszyce on June 22, 1941, when Hitler’s armies invaded the Soviet Union. Oleszyce was occupied that morning. As Eva tells us, the German terror began without delay:

The Times-Picayune’s coverage of the war in Russia, where the German army would ultimately be shattered, began on June 22nd, the first day of the invasion:

Information about the murder of Jews didn’t reach the pages of the Picayune for another year and five months. The Soviets kept it a secret. They wanted no special attention paid to Jewish suffering. The British and the Americans felt the same way. Furthermore, they didn’t want to get involved in rescue. What would they do with the Jews they rescued? It was clear they didn’t want Jews to be rescued. Following behind the rapidly advancing German armies in Russia were the Einsatzgruppen, the mobile killing squads. In two vast sweeps across Russia in 1941 and ‘42, the Einsatzgruppen shot over a million Jews, who were first relieved of their valuables. The German army and the SS killers cooperated in the murder of Jews. The commander of Einsatzgruppe A described his relationship with the army as “very close, yes, almost cordial.”

As German victories mounted in Russia, Hitler decided it was time to deal with the Jewish question in German occupied Europe. The slaughter of Jews in Poland and Russia had already begun, but now a plan took shape to annihilate all the Jews in Europe. On July 31, 1941, Goering, based on Hitler’s instructions to Himmler, issued instructions (written by Eichmann) to Heydrich:

“I hereby charge you with making all necessary preparation with regard to organizational and financial matters for bringing about a complete solution of the Jewish question in the German sphere of influence in Europe.”

These few words marked the end of one chapter of Jewish history and the beginning of another. Holocaust historian Raul Hilberg has written,“The centuries old policy of expulsion was terminated and a new policy of annihilation was inaugurated.”

On October 15, 1941, the Nazis began the “resettlement” to the “east” of Jews from Germany, Luxembourg, Austria, and the Protectorate of Bohemia and Moravia. That same month, the Nazis and Lithuanian collaborators transported our survivor Shep Zitler’s niece Zerna Morgenstern to the killing grounds in the Ponary Forest, four miles from Vilna.

Himmler witnessed an Einsatzgruppe massacre near Minsk. The SS general von dem Bach-Zelewski complained to him: “Look at the eyes of the men in this commando. How deeply shaken they are. These men are finished (“fertig”) for the rest of their lives. What kind of followers are we training here? Either neurotics or savages!” For the sake of the killers, a different approach was needed. The transition to gas chambers was easy. Gassing of human beings had been the basis of the short-lived euthanasia program. The experts were already on hand and soon on their way to occupied Poland.