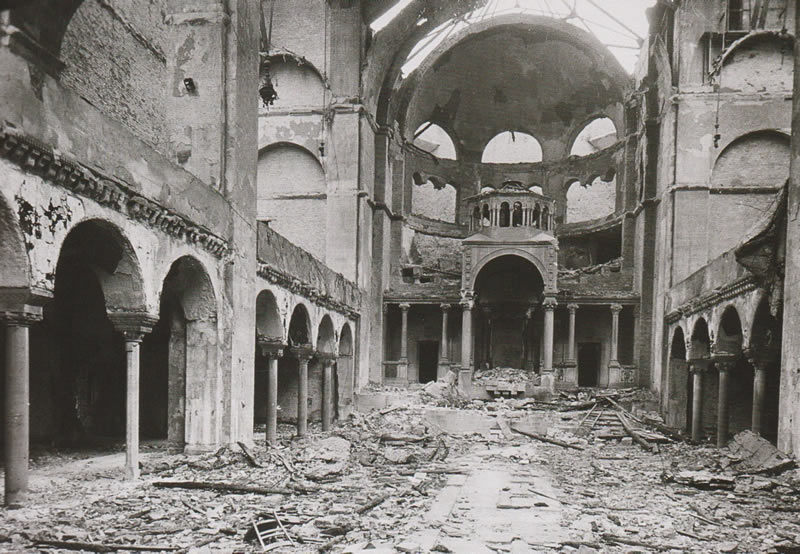 “The essential thing to Berlin was that here at last a Jew had slain a Nazi.”

In the aftermath of the Anschluss in March 1938, Polish Jews living in Austria fled back to Poland, where they still had citizenship, or so they thought. The Polish government, its declared policy to force Jews out of Poland, wasn’t interested in Jews returning to Poland, and promulgated a decree whose purpose was to annul the citizenship of Polish Jews who had lived outside the country for 5 years or more. Virtually overnight, 50,000 people became stateless.

Not to be outdone by the Polish government, the Nazis quickly made arrangements to round up and deport the Polish Jews in the Reich before the Polish citizenship law went into effect. The “action” came on October 28, 1938. The Polish Jews were seized from their homes across Germany, loaded on trains, and dumped in a no-man’s land on the German-Polish border. In Paris, a 17 year old Jewish refugee from Germany was enraged when he got word of the brutal expulsion of his parents and sister from Hanover, Germany. Enraged and out for revenge, Hershl Grynszpan was enraged and purchased a revolver. “God forgive me,” he wrote his parents in a last card. On the morning of November 7th, dressed in a coat and tie, he went to the French Embassy. As a ruse, he asked to deliver a document to the ambassador’s secretary. He was directed to the Third Secretary, Ernst vom Rath. Befitting a diplomat with aspirations, he joined the Nazi Party before Hitler came to power. Grynszpan said, “You are a filthy boche and here, in the name of 12,000 persecuted Jews, is your document.” He pulled out his revolver and fired 5 times, striking vom Rath twice and mortally wounding him. Grynszpan was arrested. He told the French prosecutor, “To be Jewish is not a crime. We are not animals. The Jewish people have a right to live.”

Vom Rath died at 4:30 on November 9th. That night Hitler was in Munich attending the annual commemoration of the 1923 putsch. News of von Rath’s death reached him at 9 o’clock. He was overheard telling Goebbels, “I think the SA should have a fling.” That meant the Brownshirts should have an opportunity to vent their sadistic rage and, incidentally, grab Jewish property, all under the guise of a “spontaneous” outburst of righteous anger by the German people. The orders, long in the making, went out to Nazi party offices and police stations in the Greater German Reich: burn the synagogues, destroy Jewish homes and businesses, protect German property, take Jewish men into “protective custody,” and packed them off to concentration camps.

SA men dressed in civilian clothes led the assault. Ordinary people watched the macbre spectacle. The synagogues in the Greater German Reich were torched. A few were spared because they happened to be located next to German owned buildings. Firemen were on hand to protect the Aryan property. Seven thousand Jewish shops were demolished, the contents dumped on the street. Thieves ran wild. Ordinary people grabbed what they could. “Witty” Berliners gave the pogrom a name that took license from the chards of glass from the smashed windows: Kristallnacht, or Night of the Broken Crystals. The cruel reality was replaced the image of crystals glimmering in the night. Kristallnacht, if properly named, was Pogromnacht (Night of the Pogrom). Thirty thousand Jewish men, many of them veterans of the 1914-’18 war and dressed in coats and ties and overcoats, were sent to concentration camps. Many never left. A urn was sent to their relatives, with a bill for postage. Those with visas, or money to bribe the Gestapo, were released. Treated with unimaginable cruelty, they were haunted for the rest of their lives.

The Times-Picayune reported extensively on Kristallnacht. The first related article appeared on November 10th. For two of the next three days, coverage of Kristallnacht dominated the front page. On November 12th, the newspaper published an editorial, “Pogrom, New Style.”

The Picayune’s first article was on page 6 in the November 10th issue. It reported vom Rath’s death on November 9th and (accurately or not) quoted Herschel Grynszpan: “I did not want to kill. I felt I had to do something to show our despair…I lost my head – I have done a horrible thing.”

Kristallnacht was front page news in the November 11th issue. Across the top of the page was the headline: “KILLINGS CLIMAX RIOTING BY NAZIS, TORCHES PLACED TO SYNAGOGUES.” The reporter referred to “Mobs,” “wreckers,” and “angry crowds” but not to the Brownshirts and Hitler Youth who led the assault. Yet the reporter intimated that the violence was government sanctioned and not spontaneious: “At the height of the demonstration few police were seen.” Not everything went off without a hitch. Ordinary Germans weren’t invited to loot. They invited themselves: “The crowd surged into the store. Women started grabbing what they could lay hands on.” The companion of violence was greed.

On November 12, 1938, readers of the Picayune turned to page 3 for information about the pogrom, and read again that the police “kept looking the other directions whenever wreckers were at work.” Nearly all “the Jewish temples” in Germany were destroyed during the “mob’s well-organized assault,” and Jewish men “were arrested in droves and carted off to undisclosed destination.”  The meaning of “undisclosed destination” was clear.

The Picayune’s editorial on November 12, 1938, came with the headline “Pogrom, New Style.” The killing of vom Rath wasn’t, as the editorial suggested, the first time “a Jew had slain a Nazi.” In Davos, Switzerland, on February 4, 1936, a Jewish student named David Frankfurter assassinated Wilhelm Gustloff, head of the Nazi Party’s organization of Germans living in Switzerland. As for Goebbels’ suggestion that soon the Jews would be kicked out of Germany, the editors wrote: “Where they would go, or how, none can say. But the German government would have their property and what money they have left.” And no country was willing to accept the impoverished. The editors steered clear of suggesting the United States relax the quota and allow more refugees into the country. That idea was very unpopular, and not good for sales. The editors concluded: “The Foreign Policy Association, a private research organization, estimates that of 660,000 people in Germany and Austria who figure in the refugee problem, 300,000 are Jews, 283,000 ‘non-Aryans’ and 25,000 Catholics.”

On November 13, 1938, the Picayune published a front page article on Kristallnacht. The U. S. government contemplated breaking off diplomatic relations with Germany (the ambassador was recalled and didn’t return to Germany). The German Jews were ordered to pay an “atonement” fine of one billion marks, the equivalent of 400 million dollars. They were also forced to bear the cost of repairing their damaged property. Insurance payments went to the German government.

Another article in the Picayune of November 13, 1938, was on page 2. It reported that German Jews trying to escape to France were were turned back by French gendarmerie, “acting on strict orders from Paris.” In Munich, a Nazi mob attacked Cardinal Faulhaber’s palace. The local Nazi leader said Faulhaber represented “Roman Catholic allies of Jews.”

Another article on page 3 of the November 13th issue reported that Herschel Grynszpan “wept and prayed” when told of the one billion mark fine levied against German Jews “because of his act.” He was quoted saying he would pray “for forgiveness for what I have done to my people.”

On page 8 of the November 13th issue, an article featured Dr. Baruch Braunstein, described as a Zionist and a “student of international affairs.” He was conducting a three day “institute” at Touro Synagogue “on Jewish problems.” He recommended the opening of Palestine (British Mandate) to massive Jewish immigration.